A Bag of Music - Petite Fleur 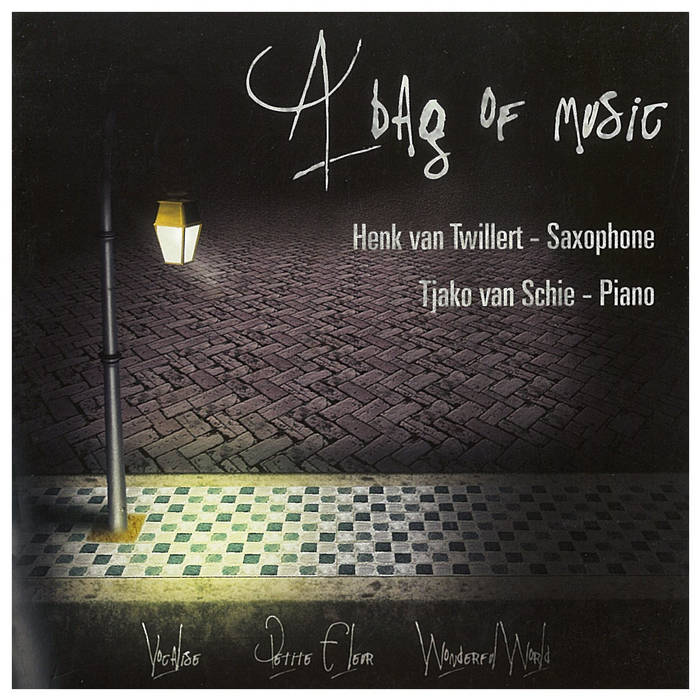 "Henk van Twillert was 20 years old when he learned me to play the baritone saxophone with my heart. After many years I spotted him in New York City in 2009. Since then I followed him on concerts in Amsterdam, Caracas, Porto and organised tours in the Dutch Antilles with Tjako van Schie (2010) and “Vento do Norte” (2011)
Henk van Twillert is a musician pur sang, always performing with emotions and passion to get in contact with his audience to let them know that Music is a pleasure and a way to share our feelings, tears and joy, fun and sadness.
This triple CD is a milestone for Henk and Tjako because it represents their broad interest and experience as “world citizens”`in music, open for different styles and cultures and crossing the conventional borders of their profession.
Enjoy this bag full of emotions, cultures and excellent craftsmanship."
Bonaire, September 2011,
Guus Gerritsen

Henk van Twillert was a teacher of saxophone at the conservatories of Hilversum and Amsterdam and Tjako van Schie became piano accompanist of the International Saxophone Class of Henk van Twillert.

Together with Fernando Valente (1962- 1998), Henk van Twillert opened the saxophone Class at the Escola Superior de Musica e Artes do Espectáculo - Superior School of Music and Performing Artes, Porto, Portugal in 1998. Of course it didn’t take long for Tjako van Schie to land as well at the airport of Porto to become part of the pedagogic team of the ESMAE. AS a duo in teaching and playing they have become inseparable. In the meantime they visited several countries in Europe, South - America and recently the Dutch Caribbean performing both in workshops, master Classe and concerts.

Their desire of sharing and capturing their love for music on CD became a long term affair and early planning started in 2003. The desire stayed for years but the CD didn’t appear … where and how to catch their full bag…|? It was that beautiful summer of 2008, August 2008, when they did their first recording in Amsterdam for the CD”Vocalise”. It took some years until July 2011 wherebthey went on recording there second CD” Petit Fleur” in Portugal. The Third CD “Wonderful World” however wasnone the following month accompanied by the smiling sun of Portugal! The program they recorded on these three CD´s followed their travels, concerts, their talks, colleagues and friends they met… and still they have a bag full with desires…
Amsterdam, September 2011
Henk van Twillert"

Dutch saxophonist Henk van Twillert (1959) studied at the Sweelinck Conservatory Amsterdam with Ed Bogaard where he completed his studies for the Superior Soloist diploma, passed “with distinctions”. In 1979 he was founder of the renowned Amsterdam Saxophone Quartet. The quartet played successful tours with numerous renowned musicians, including Jaap van Zweden, Daniël Wayenberg and Han Bennink. Remarkable events were the final concert of the EXPO ’98 in Lisbon and the opening of the Ajax soccer stadium Arena in Amsterdam.

Since 1993 Henk van Twillert recorded numerous CD’s and performs as a soloist with the Amsterdam Soloist Quintet. This co-operation resulted in the highly successful productions “Tango, a homage to Astor Piazzolla” together with violinist Sonja van Beek, and “Homage to Heitor Villa-Lobos”. 2001 became a landmark in the career of Henk van Twillert when he started to play and recorded the famous “Cello Suites” from Johann Sebastian Bach. In 2002 Van Twillert recorded a CD with Portuguese fado music, “Saudades” together with the distinguished Portuguese singer Carlos do Carmo. From 2006 on he was invited to the prestigious New Port Music Festival in America. Together with the Latvian soprano Inessa Galante he recorded the CD “Confesso”. Between 2009 and 2011 Henk van Twillert was residing in New York where he worked on his Ph.D. “Bach and the Blowing Bowing - The Cello Suites on Saxophone”. At the same time Henk started songwriting and completed his first album “New York” as singer / bandleader: Mr.Henk & Band.

Henk van Twillert is tutor teacher of Saxophone at the Superior School of Music and Performing Arts in Porto, Portugal, where he formed several saxophone ensembles amongst others Portuguese Saxophone Orchestra and Vento do Norte. After 25 years tutor teacher at the Amsterdam Conservatory he changed position to guest teacher. Van Twillert always combines love for music and teaching by giving workshops / master classes and concerts around the world. In his pocket he carries his special music program for children “Stars of the Future”.

Tjako van Schie was born in 1961 and started playing the piano at the age of seven. He received his musical education from Ben Smits at the Conservatory of Zwolle where he successfully concluded his study for the Superior Soloist Diploma in 1985. After his studies he followed several master classes with Boris Bloch, went to Weimar, Germany, where he had lessons with Detlef Kraus and New York with Jacob Lateiner. As a soloist he played in Europe, China and Canada. Nowadays Van Schie works as a performing pianist, composer, arranger, teacher and coach at the Conservatory of Amsterdam and guest teacher at the Superior School of Music, Porto, Portugal.

Over the past decades he performed and record several remarkable programs. Among others the “Goldberg Variations” from Johann Sebastian Bach can be seen as one of the highlights. Afterwards he completed the recording “Water - Source of Life” wich includes works of Felix Mendelsohn, Edward Grieg and four compositions of Tjako van Schie.
Together with Dutch violinist Adriaan Stoet Van Schie recorded the CD “Yiddish Music From Ghetto’s & Concentration Camps” and the live recording “Die Geigen, Ja Geigen”, with compositions of George Friedrich Handel, Edward Elgar, Jules Massenet and last but not least the “Fado Azul” from Tjako van Schie. International renowned musicians have performed several of his compositions.
As arranger Tjako van Schie completed the arrangement from Robert Schumann’s “Piano Concerto” for Saxophone Orchestra and Piano, he performed the concerto as soloist at the first International Clarinet and Saxophone Festival 2010 in Caracas, Venezuela, a festival where several compositions by Tjako van Schie were played for the first time.

Tjako van Schie also loves to teach music for this he has worked with several known musicians from all over the world. For the past 25 years he closely collaborated with saxophonist Henk van Twillert, as well in his saxophone classes, concerts and festivals.