Duke Ellington revisited: “It don’t mean a thing, if it ain’t got that swing” 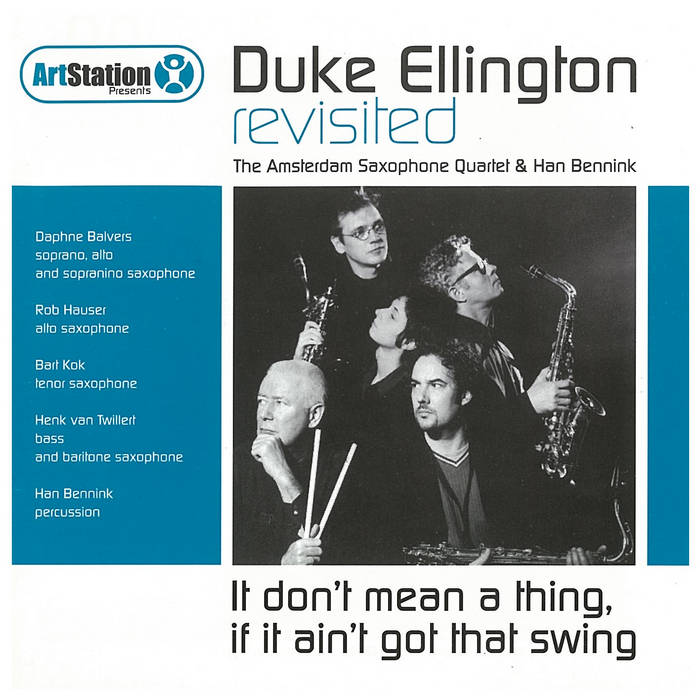 It don’t mean a thing…
Duke Ellington died in 1974. He left a multitude of compositions and recordings, from the early twenties up until his death. But he left more. He left the history of jazz, the history of his band and the history of many great jazz musicians, some of them dedicating their career to that same band, to the music of the Duke.

Twenty-five years later, with all this inspiration the Amsterdam Saxophone Quartet take up the Music of Duke Ellington to arrange a full concert program. We are especially interested in the early years, when Ellington played the Cotton Club, and the period shortly after.

For the Cotton Club, entertainment was the main purpose ( maybe the only one)but for Ellington entertainment already consisted on many things. Apparently written to make people dance, drink laugh and cry, The compositions from this period show those subtile elements and that elegance that, apart from his harmonious genius, would make Ellington famous later on.
Exactly this made us think this music would suit us well, apart from the fact we simply love it!

There was only one thing: in Spite of our wish to emphasize the purity of this music, at the same time felt the need for something extra, something… that we couldn’t get with only the four of us, and that something appeared to be Han Bennink. Han who, not only in his inimitable way of playing, but also with his jokes and stories about everything the Duke Ellington Orchestra, made this project unforgettable for us.
Thank you, Han!

The Amsterdam Saxophone Quartet & Han Bennink present:
It don’t mean a thing, if it ain’t got that swing

In 1999 we commemorated the 25 anniversary of the legendary composer and bandleader, Duke Ellington. This jubilee stimulated the Amsterdam Saxophone Quartet to make, together with drummer and multi-instrumentalist Han Bennink, a tribute to the Duke. They chose for the early works of Ellington, compositions from the 20’s and 30’s, which are characterised by a solid structure and an inventive, humanistic art and arranging. These old masterpieces seem tailor-made for this quintet: the skills of the musicians are shown to a full advantage, and the sparkling arrangements and the enthusiastic way of playing fit perfectly together.

A team of arrangers: Henk Huizinga, Johan Plomp, Jan Wessels and Patrick Schenkius, made a selection of early compositions by Duke Ellington, and adapted them for saxophone Quartet and percussion. They managed to create a varied programme, consisting of works from the Cotton Club-period, when jazz was still considered dance music, and compositions from the years ’32-’38, when Ellington’s work slowly developed from dance music to concert music.

After an extensive national theatre tour, the Amsterdam Saxophone Quartet and Han Bennink decided to go to the Leroy-studio in Amsterdam and record this magnificent programme. Undoubtedly, the enthusiasm of the five musicians and the spirit of Duke Ellington’s music will infect anyone that listens to this CD.


The Amsterdam Saxophone Quartet
Biography
“ No Other instrument is many-sided like the saxophone.
Our saxes just beg us to play all different kinds of music.”

The Amsterdam Saxophone Quartet was founded in 1979 by four students of the Sweelinck Superior School of Music in Amsterdam. Though the quartet consists of four classical schooled musicians, its repertoire covers a wide range of different styles. Beside the traditional French repertoire for saxophone quartet, the ASQ also played a lot of pieces by contemporary Dutch composers, partly written by order of the ASQ. The rest of their repertoire consists of arrangements and original pieces varying from ‘striptease’ to ‘heavy metal’ and anything in-between. Examples are: Slight Return by Jimi Hendrix, Frank Zappa Suite, Portorican Suite, Fado Suite, Duke Ellington Suite and Rock’n Roll Suite.

The quartet also often plays together with guests soloists. Performances with popular Dutch artists like singer Make Nelis, Accordionist Johnny Meijer and his sucessor Eddir Hoorenman, jazz saxophonist Hans Dulfer and the famous group The Nits all led to memorial concerts. Large nationwide theatre tours were made with Holland’s most famous violinist Jaap van Zweden ( Leonard Bernstein’s West Side Story and the Cole Porter Story)nand with the piano -player Daniël Wayenberg ( The Gershwin Story). In 1998 the quartet performed together with the Dutch Chamber Choir in the opera Gershwin in Blue, written by composer Chiel Meijering and scripwriter Lodewijk de Boer. In the season 1999/2000 the ASQ made a theatre tour called It don’t mean a thing… with percussionist Han Bennink.Early compositions by Duke Ellington revived by the enthusiasm of there five musicians. Preparations for a CD of this program are in the full swing. The last two seasons were dedicated to the great classics like Death and the Maidem by Schubert and The Art of Fugue by Bach.

Beside performing, the Amsterdam Saxophone Quartet also attaches much importance to education. The four members all teach at music schools and superior Schools of music. One of the highlights every season is a trip to Portugal, where the ASQ gives masterclasses and concerts im Oporto, Aveiro and surroundings. During this yearly event teaching and performing are perfectly in balance, the ideal of the ASQ.


Han Bennink
Drummer and multi-instrumentalist Han Bennink was born in Zaandam near Amsterdam in 1942. His first percussion instrument was a kitchen chair. Later his father, an orchestra percussionist, supplied him with a more convencional outfit, but Han never lost his taste for coaxing sounds from unlikely objects he finds backstage at concerts. In Holland in 1960’s Bennink was quickly recognised as an uncommonly versatile drummer.
As a hard swinger in the tradition of his hero Kenny Clarke, he accompanied touring American jazz stars, including Sonny Rollings, Ben Webster, Wes Montgomery, Johnny Griffin, Eric Dolphy and Dexter Gordon. He is heard with Gordon on the 1969 album “ Live at Amsterdam Paradiso” and with Dolphy on the 1964´s “Last date”. At the same time, Bennink participated in the creation of a European improvised music which began to evolve a new identity, apart from its jazz roots. With fellow Dutch pioneers, pianist Misha Mengelberg and saxophonist Willen Breuker, he founded the musicians collective instant composers Pool in 1967.
In1966, Bennink played in US´s Newport Jazz Festival with the Mengelberg quartet. From the late 1960´s through the 70´s Bennink collaborated frequently with Danish, English and German musicians, notably John Tchicai, Derek Bailey and saxophonist Peter Brotzmann, with whom he had a logstanding duo.

Benninks main vehicle is Trio Clusone, which he co-leads with saxophonist and clarinetist Michael Moore and cellist Ernest Reijseger, a band noted for its freewheeling mix of swinging jazz standarts, wide open improvising and tender ballads.

If you like Duke Ellington revisited: “It don’t mean a thing, if it ain’t got that swing”, you may also like: