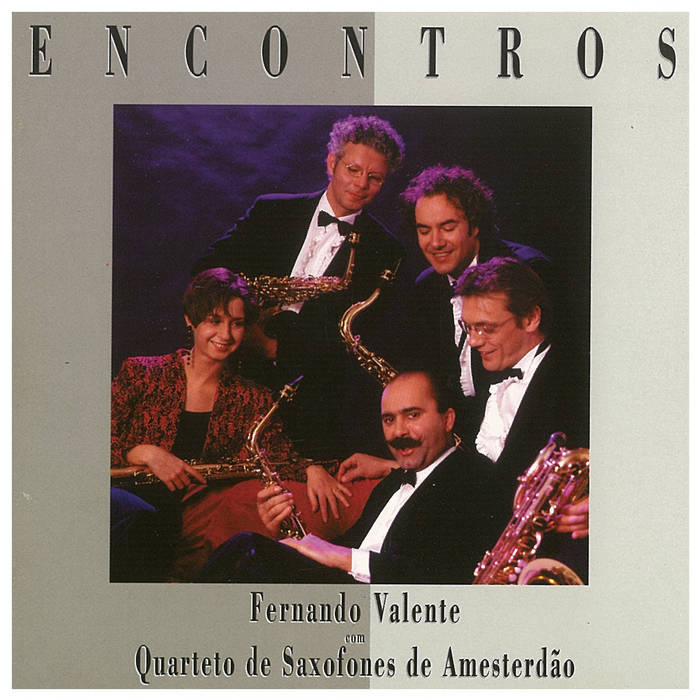 It all started one evening when the Aveiro Saxophone Quartet were playing in Coimbra.

Henk van Twillert, the baritone saxophonist of the Amsterdam Saxophone Quartet was sitting in the audience. After the concert, Henk and the Aveiro Saxophone Quartet had a chat, a conversation that was to have many consequences …


:.Fernando Valente
Fernando Valente Studied at the Aveiro and Lisbon Conservatories. He first studied violin, then saxophone, piano, harp and advanced composition. In 1981 he concluded his saxophone studies at the Aveiro Conservatory under Fernando Rainho, gaining the highest marks. Afterwards he continued his music studies in the areas of composition and saxophone, taking several courses on composition in Portugal and Spain. He continued his saxophone studies with François Daneels and Ed Boggard in Belgium, with Daniel Deffayet in France, with the Amsterdam Saxophone Quartet in Holland, and with this quartet and the Rascher saxophone Quartet and Daniel Deffayet in Portugal.
Over the last few years he has attend the contemporary music encounters at the Calouste Gulbenkian Foundation, violin, ensemble and pedagogy of musical education coursesand composition, musical analysis and music therapy seminars.
As a teacher at the Aveiro Conservatory since 1985 he has taught saxophone, analysis, composition techniques and ensemble classes. He also belongs to the committee responsible for the artistic activities of the Aveiro conservatory.
He founded the Aveiro Saxophone Quartet in 1986, with whom he has given concerts in Portugal, Spain and France and also made recordings for radio and television. In 1989 he reated the Aveiro Conservatory Light Orchestra. In 1993 the Aveiro Saxophone Orchestra, and in 1995 the Aveiro Big Band. He is a member of the artistic board of the “Encontros com Musicas” (Musical Encounter) that takes place in Aveiro Annually.
Since 1990 he has organized saxophone courses in Portugal under the direction of the Amsterdam Saxophone Quartet, with whom he has performed in several recitals and televisions programmes as soloist.
Since 1993 he has been organizing Jazz workshops in the Aveiro conservatory under the Carlos Martins Quartet; in 1995 the direction passed on to famous double-bass Player Zé Eduardo. Fernando Valente has given several recitals and taken part in various radio and television programmes as saxophonist. Together with the Coimbra Wind Ensemble he has played in France, Belgium, Luxemburg and Poland. He has been the pedagogical Director of Agueda Conservatory since 1994.

You would not believe what four saxophones can do!
The unlimited power of expression of the saxophone has always been then starting point for the selection of the quartet’s repertoire. At times it is smooth and brilliant and other times dark and “misty” or sensual and exciting.
All these aspects find expression in the various methods of playing of this quartet and which can be heard in pieces by Glazounov, Florent-Schmitt and Rivier, representing the classical style, or in pieces by Meijering, Dikker and Ketting representing the contemporary Dutch repertory ( the entire repertory was composed orinally for the A.S.Q..
A large part of the repertoire consists in arrangements such as: “Puerto Rican SuitE”, “ Duke Ellington Suite”, “West Side Story”, “ An American in Paris”, “ Frank Zappa Suite”, and “ Jimmy Hendrix Suite”.
The A.S.Q. appears regularly with famous jazz, folk and classical music soloists.
In 1994 they recorded a CD in Co-operation with the famous Dutch violinist Jaap van Sweden, that included “An American in Paris” (G. Gershwin) and West Side Story” (L. Bernstein) both arranged by Henk Huizinga.
The ASQ has already recorded five CD’s. They have been in Concert tors through Germany, Belarus, Belgium, France, Italy and Portugal. From August 1996 they will be touring through Holland, Japan, USA, France and Italy.

Studied in Utrecht with Ed Bogaard. Played an important part in the development of Modern Dutch Theatre, both as a saxophonist and an actor, with Hauser Orkater. Joined the quartet in 1985. Teaches Sax in the Music Conservatory of Bloemendal. Beside his work as a director for T.V. and theatre, he composes for television, opera, theatre, cinema and ballet.