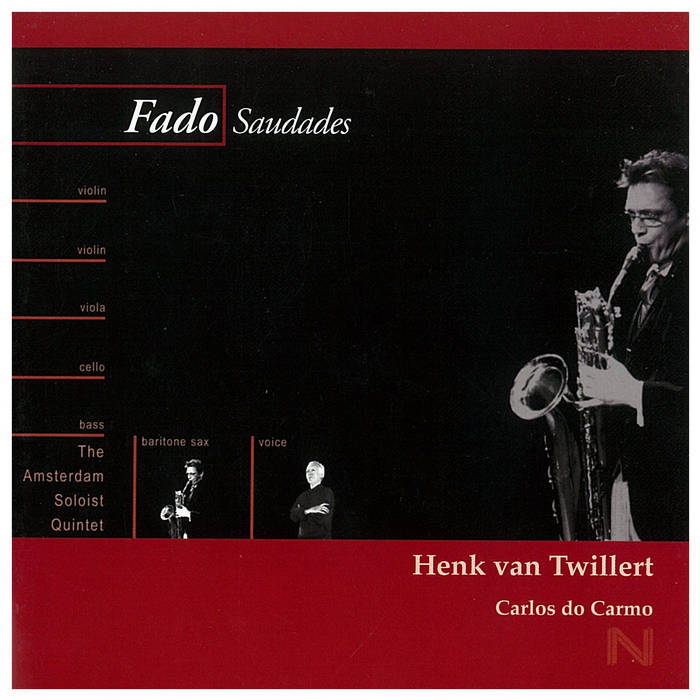 (2001) Fado Saudades
Saudades, in dutch language it means something like “mijmeringen’. To me this disc is the result of my discovery of Portugal in 1989, a country rich in its culture and endless possibilities, a country with strong and intense human relationships and most of all – a country with a special feeling … Fado… Fado, a beautiful feeling, impossible to explain.
A great loss, recognition, desire and hope. All of this is experienced in Portugal. By listening to Amália, Carlos Paredes, Carlos do Carmo, Pedro Abrunhosa, Fernando Valente, Vitorino d’Almeida, …, …, … By having the honour, except for the first two, to work with all these great musicians. By teaching to my students and sharing my way of making music with them. Because of the warm welcome of the audiences. And because all my friends always being there for me. This is my homage to all of this. I will never be Portuguese, but am I only Dutch? Viva Europe! So that Fado can always be a little bit mine.
Henk van Twillert

Saxophonist Henk van Twillert studied at the Sweelinck Conservatory Amsterdam with Ed Bogaard. He completed his studies as a Soloist “with distinctions” on the baritone saxophone. At this moment he is one of the leading baritone saxophonists in Europe.

In 1979 he was co-founder of the Amsterdam Saxophone Quartet. This Quartet made worldwide tours with renowened musicians, including Hans Dulfer, Han Bennink, Daniel Wayenberg and Jaap van Zweden. The Amsterdam Saxophone Quartet played at the final concert of the EXPO’ 98 in Lisbon and at opening of the Arena Stadium in Amsterdam. Also together with the Dutch Chamber choir they played in the opera production “Gershwin in Blue”.
At a concert in Coimbra in 1989, Henk van Twillert met Fernando Valente (died 1998) and his quartet. Afterwards, they started and intense and successful cooperation (workshops, masterclasses and concerts). Both can be considered as the founders of the Portuguese saxophone school. This resulted in the opening of the Saxophone department of Oporto (ESMAE) in 1999. Together with the Amsterdam Saxophone Quartet, Fernando Valente recorded a CD, “Encontros”.
Since 1993 baritone saxophonist Henk van Twillert performs as a soloist with the Amsterdam Soloist Quintet. This cooperation resulted in the Highly successful productions Tango, a homage to Astor Piazzolla together with the violinist Sonja van Beek, and Homage to Heitor Villa- Lobos and Great Americans together with violinist Emmy Verhey. Recently Henk van Twillert complete a unique CD with the famous Cello Suites by Johann Sebastian Bach played on baritone saxophone.

He inspires various composers to write music for baritone saxophone. Composers like Chiel Meijering, Gijs van Dijk, João Pedro Oliveira, Carlos Marques, Virgilio Melo and Anke Brouwer have written contemporary pieces for him. Together with pianist Tjako van Schie he formed a duo. Their repertoire varies from classical to contemporary music. Coming season they will record a CD with songs of Rachmaninov.
At this moment he is professor of saxophone at the Conservatory of Amsterdam and the Escola Superior de Música e das Artes do Espectáculo (ESMAE) in Oporto and he is conductor of the Orquestra de Saxofones Portuguesa.

The Amsterdam soloist quintet (ASQ) was founded in the summer of 1997. This string quintet consists of professional musicians who play in various Dutch orchestras and chamber ensembles and also as soloists.
The Amsterdam soloist quintet and Henk van Twillert play concerts and give master classes throughout Europe. The cooperation started during the preparations of the Portuguese tour “Inalcanzablement circa”, a Piazzolla program together with violinist Sonja van Beek. Afterwards they played several concerts at the renowned Boulevard festival in the Netherlands.
They recorded the CD homage to Heitor Villa Lobos, arrangements of the famous Bachianas Brasileiras. Together with violinist Emmy Verhey, the ASQ played in “Great Americans “ a production with music of Gershwin.


Carlos do Carmo, known has “The Voice of the Fado” Carlos do Carmo was born in Lisbon. His mother, Lucilia do Carmo, was one of the greatest fadistas of her generation. He studied in Swizerland and then devoted himself to singing the Fado: his career was an immediate success.
He has made several award-winning records and has appeared at such places as L’Olympia in Paris, the Opera House in Frankfurt and in “Canecão”, in Rio de Janeiro, where he always met with great acclaim.
Both in Portugal and throughout the world, he is recognised for his fine singing and for the quality of his repertoire (he sings works by the Portuguese poets and composers). He has become one of the great names in the history of Fado. The new generations always take him as a point of reference. He has contributed in changing the sad image of the Fado and each performance of his is a delight to be witnessed. At times he tells us, and he sings, that song ceased to belong to their authors so as to pass themselves on the people who immortalise them.