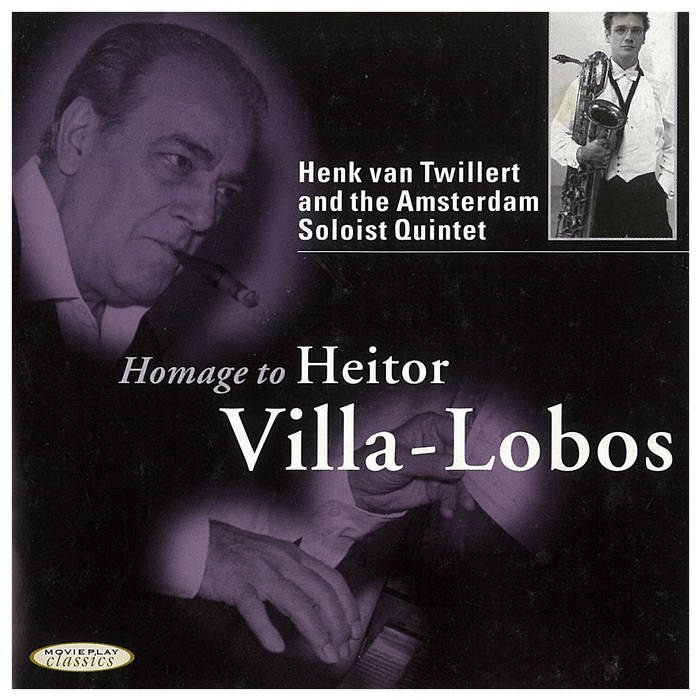 (1998) Homage to Heitor Villa-Lobos
If you have ever had the pleasure of wandering aimlessly through any street in Rio de Janeiro you will know that the city is buzzing. Like all of Brazil, the city os abuzz with dance, song and music.
A Brazilian sings, plays and shares his emotions with all around him. Brazil is street music, and street music is for everyone.
A true Brazilian composer is part of that street culture, knows that expansiveness, that direct communication of his own folk music. He is inextricably drawn towards it as to a magnet. And it was on the streets that the composer Heitor villa-Lobos (1887-1959)gained his only real education. He was averse to all forms of academicism, preferring to learn from practising musicians. He would often mingle with the popular musicians an the city streets and play along with them. Absorbing the rhythms of the chord and learning how to improvise guitar accompaniments to the capricious melodies. Villa-Lobos incorporated his experiences with popular music into his own works, such as the Symphony no. 1 O Imprevisto (1915), the symphonic poem Amazonas (1916) and the Symphony no. 2 Ascenção (1917).
After spending many years travelling through Brazil Studying his country’s folk music, Villa-Lobos went to Paris to present himself to the world as a composer.
He swiftly conquered Europe with his “singleminded impulsiveness”, although he was not without his critics. In his vast output - numbering over a thousand works - there are some pieces where his inspiration flags.
In his best works, however, Villa - lobos unerringly succeeded in striking and ideal balance between tradition and innovation, romanticism and folklore, and spontaneity and circumspection. His charming early works such as the Pequena Suite of 1013 (originally written for cello and piano and out of respect to the composer transcribed on this cd for saxophone and string quintet by Jaap Dijkhuizen) and the fouteen Choros written around 1920 for a variety of instrumental combinations provided Brazil with a national art-music.
Villa-Lobos reached his zenith as a composer in the years after 1930. He turned to Brazil where he became the godfather of musical politics, and where he invested everything he had learned into the writing of his nine Bachianas Brasileiras, intended as a homage to Johann Sebastian Bach. Villa-Lobos saw a strong connection between Bachs music and that of Brazilian folklore, where every part can have enormous melodic autonomy. The Bachianas Brasileiras - for which Villa-Lobos prepared by making various transcriptions of Bach´s Welltempered Clavier, including one for cello ensemble - are the musical manifestation of his research into these connections.
Villa-Lobos wrote his Bachianas Brasileiras for a variety of unusual instrumental combinations. The first one, for instance, written in 1930 is scored for at least eight cellos, and the fifth ( 1938-1945) for eight cellos and soprano. As a young boy Villa-Lobos has cello lessons from his father, who used a viola for the purpose, and later the cello was the only instrument he studied briefly at the conservatory. But although the cello was his instrument and the Bachiana Brasileiras are very idiomatically written, they lose none of their impact in there arrangement by Henk Huizinga for saxophone and string quintet. Even the second Bachiana Brasileira No. 2 (n1930) for orchestra does not suffer from the transformation.
In a way this transformation to a small ensemble brings Villa-Lobos´s music back to the street band, to the musicians whose music-making is both a private communion and a communal celebration.
The soul of Brazil and the spirit of Villa-Lobos shine through in the eternal splendour of the rich polyphonic, the evocative melodies and the pulsating rhythms of that street in Rio de Janeiro.

Henk van Twillert
Dutch saxophonist Henk van Twillert, initiator of the Piazzolla project studied with Ed Bogaard at the Sweelinck Conservatoire in Amsterdam, where he gained his diploma as Practising Musician on the baritone saxophone with distinction.
In 1979 he co-founded the Amsterdam Saxophone Quartet which, helped to popularise the instrument through original and exciting projects.
The quartet has toured extensively both in the Netherlands and internationally (to countries including Germany, France, Portugal, Indonesia, China), sometimes with top performers as Johnny Meijer, “Lame” Nelis, Hans Dulfer, Jaap van Zweden and Daniël Wayenberg.

Van Twillert, who gave mater classes with Fernand Valente at the conservatory in Portugal, currently teaches saxophone students at the Hilversum and Sweelinck Conservatories and also gives master classes in Aveiro, Portugal and in Aosta, Italy. In 1998 he started teaching again in Porto, Portugal, at the Escola Superior de Musica ( where he had taught preciously with Valente).

He has recorded an album with Italian pianist Gian Maria Bonino, of selections from Schumann, Satie and Debussy for Movieplay Classics. Van twillert and Bonino also perform together every year in Italy.
Henk van Twillert and the Amsterdam Soloist Quinted recently completed their second album for Moviepaly Classics, of Villa-Lobos compositions. Van twillert hopes that his activities will focus increased attention on the baritone saxophone. Several dutch composers (Meijering, Hekster, Van Dijk) have already works for him.


The Amsterdam Soloist Quintet
The Amsterdam Soloist Quintet (ASQ) was founded by saxophonist Henk van Twillert, to perform with him on his 1997 summer tour in Portugal. On that tour, the string quintet, van twillert, and sonja van Beek dis a series of concerts of the Piazzolla program “Near, and yet so unattainable.”. Immediately following their return to the Netherlands, ASQ did ten concerts at the Boulevard Festival “ Il Pleut” at Den Bosch. Since then, they have done concerts in Holland and in international venues.
ASQ consists od experienced musicians who have their name in various professional orchestras, chamber orchestras, and as soloists. The quintet recently recorded their first album (with Henk van Twillert, on Movieplay Classic) of Villa-Lobos Bachianas Brasileiras suites 1,2, and 5. During the 98-99 season ASQ will do two tors with van twillert and Emmy Verhey. The program will include Gershwin’s Porgy and Bess, among other selections.