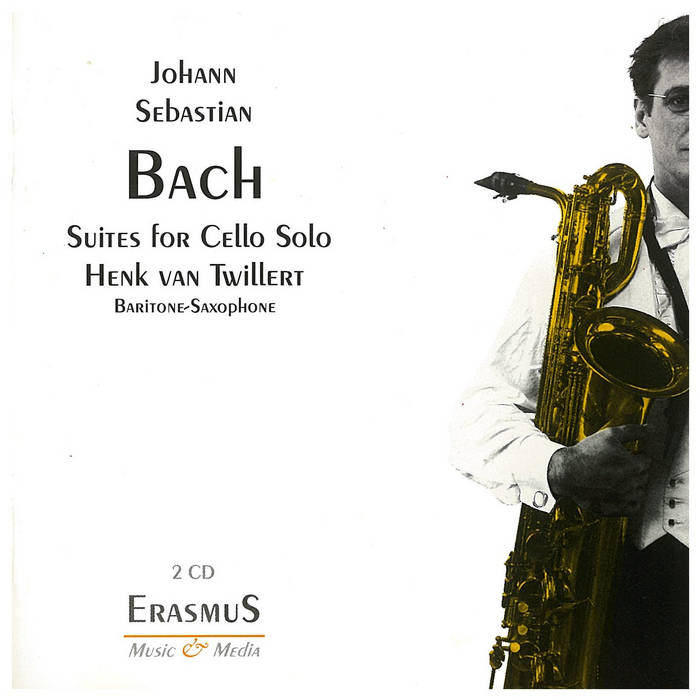 Preface
Bach wrote his six suites for violoncello shortly after his move from weimar to Cothen in 1717. The Original manuscript was lost. Performances are based on various sources such as a copy in the former Prussian State Library, and Anna Magdalena Bach´s version.The suites vary considerably. However, their construction is rather similar. Each suit consists of a Prelude followed by a number of period dances such as Allemande, Bourrée, Courante, Gavotte, Gigue, Minuet or Sarabande.
It certainly take courage and passion to play this music on a baritone sax of all instruments. After all, these suites were written for a bowed string instrument. Henk van twillert has the necessary courage, and the passion. Is that enough? Of course not! What surprises me in Van Twillert playing is the free handing of both this brilliant music and his instrument. Meanwhile Bach is never hurt in the process. Van twillert is more or less driven by the musical material. Now and again he takes a side path, climbs a mountain, trips over his feet sometimes, He may fall back into a deep melancholy feeling to arrive home safely. Henk van twillert plays as if he needs to, personally. And you can hear that.
Lodewijk de Boer

Introduction
Works of few composers have been arranged so often as Johann Sebastian Bach’s. It often concerns arrangements for her instruments than Bach had in mind. Early examples are Mozart’s fugues K404a/405 from 1782783 based on the Wohltemperiertes Klavier (1722/42).
Robert Schuman wrote piano accompaniments (1853) for Bach´s suites for violin and cello. Since the 19th century arranging Bach´s music was a very common thing. In fact the world did not get to know Bach until 19th century. And the Romantc era had a sound very different from the first half of the 18th century. Romantic composers and arrangers created Bach arrangements for symphony orchestra. In the 1960´s authenticity became a household word in musical life. However, at the same time Bach´s works were played on a synthesizer or accordion ( Harry Moeten!). Bach never knew these instruments in the least! Since the “International Bach Year 2000” Bach can be seen with a kaleidoscope eyes. Richard Stoltzman plays Bach on a clarinet. Henk van Twillert presents Bach´s cello suites on a baritone saxophone. This instrument lacks the basic cord of four strings. But its one low voice and its dark colours do match the violon-cello. Another thing to considerer is that the Violin-cello was hardly and individual instrument in Bachs time. Bach wrote his suites for a player who also mastered the viola pompous and its five strings. Bach himself arranged one of the cello suites for lute. Perhaps one may associate the present free and liberal interpretation of Bach´s suites with post-modern indefiniteness. Ambiguity has gradually won ground while solid, historical, musicological, calvinist, and purist ideas have dominated the interpretation of Bach´s music since the 1970´s.
ThvH

J.S. Bach wrote much instrumental music between 1717 and 1723. At the time he was in charge of chamber music at the court of Anhalt-Cothen. Thus, it was for the entertainment od the young Prince Leopold I that Bach wrote many instrumental masterpieces. At several occasions Bach and his musicians travelled in the company of their prince. For instance to Karlsbad.
When Bach took the post he had to deal with about half a dozen musicians. The band grew thanks to both Leopold, and his superb home composer. Sometimes the Prince himself may have joined the orchestra. One of the excellent musicians was Christian Ferdinand Abel ( 1683-1737) who taught his master to play de bass viol. Another fine player was the cellist Christian Bernhard Link. Bach wrote his cello suites for these - or one of these - musicians.
The cello suites are absolute masterpieces. They were intended as concert pieces rather than dance music. But on paper, in measure, and in name the individual movements are still dances. In all suites the order of Allemande, courante and Sarabande remains the same. The rich and varied Allemande is characteristic in its moderate energy.The airy Courante requires a quick tempo. The slow Sarabande reflects its honourable Spanish origin. The Minuetto in Bach´s suites are remarkably calm compared to well-known out dances of the classical period. The later classical “trio” is still called Minuetto II. Its key opposes the earlier Minuetto. The Bourree is a healthy lively dance not unsimilar to the gavotte. The preludes are not unlike toccatas. A fuge is found in the prelude of the 5th suite.

This group made successful world tours along with various renowned musicians, including Jaap van Zweden, Daniël Wayenberg and Han Bennink. The Amsterdam saxophone Quartet played at the final concert of the 1998 Lisbon EXPO, and the ceremony opening of the Amsterdam Arena Stadium.
The group also joined the dutch Camber Choir in the opera production Gershwin in Blue.
Since 1993 Henk van Twillert has been performing as a soloist with the Amsterdam Soloist Quintet. This resulted in the highly successful CD recordings and productions
“Tango, a homage to Astor Piazzolla” together with violinist Sonja van Beek, and “Homage to Heitor Villa-Lobos” and Great Americans together with violinist Emmy Verhey. Recently, they recorded a new CD: Saudades. On this live recording they play fado music with the famous Portuguese singer Carlos do Carmo. Van Twillert inspired various composers to write new pieces for baritone saxophone. Chiel Meijering, Gijs van dijk, João Pedro Oliveira, Carlos Marques, Virgilio Melo and Anke Brouwer have written original works for him.
With the Italian pianist Gian Maria Bonino henk van twillert gave marter classes and concerts in Italy. They also recorded a CD, “ On Classical Tour with the Baritone Saxophone” with music from Shumann and Debussy. In another duo Van Twillert plays together with pianist Tjako van Schie. Their repertoire varies from classical to contemporary music. With the Portuguese saxophonist Fernando Valente Van twillert founded the Portuguese Classical Saxophone School. Presently, he holds the posts of professor at both the Amsterdam Sweelinck Conservatory and the Escola Superior de Musica e artes do Espectaculo. Henk is also conductor of the Orquestra de saxofones Portuguesa.

Acknowledgment
Summer of 2000. Portugal. Henk asks me if I would like to be the producer of his recordings of Bech´s Suites. I Shiver! Over two hours of music. Baritone sax solo. And what music! Am I a Bach scholar? I want to think it over.Bach, Cello suites, saxophone… Suddenly I realise that over the past 20 years these words have dominated quartet rehearsals, phone call, nocturnal debauchery, sessions. As if they form a Holy Trinity. It all goes back to the Bachstraat ( Amsterdam Conservatory). The next day I agree. I know immediately what to do while supervising the recordings sessions. Let Bach be Bach. But most of all: let Henk be Henk
Bart Kok