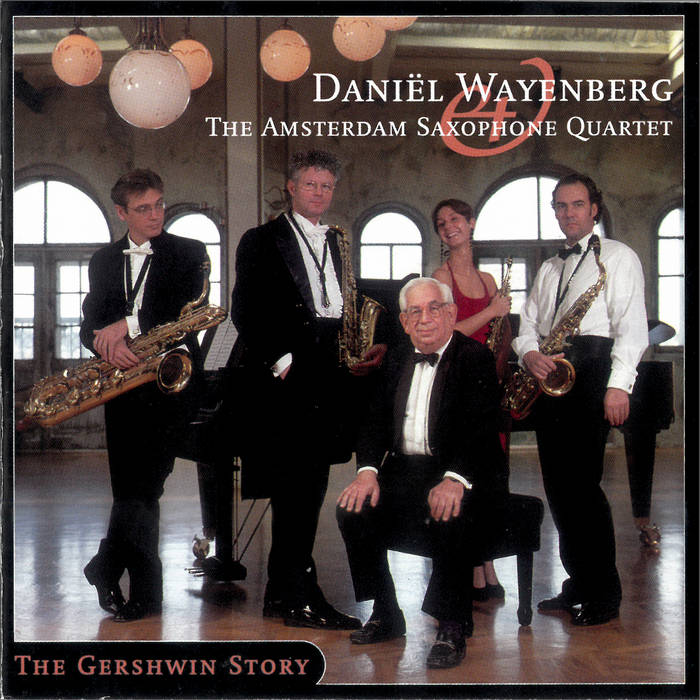 (1998) The Gershwin Story
If one composer has succeeded in elevating entertainment music to an art, it must have been George Gershwin (1898-1937). If you listen to his music you will feel as if you are simultaneously on Broadway, in Carnegie Hall and in Hollywood. It is well known that Gershwin was a virtuoso pianist as well as a composer. After all, his most famous composition, Rhapsody in Blue, premiered with George Gershwin himself at the grand piano.
When The Amsterdam Saxophone Quartet decided to devote itself to a complete Gershwin Program, it was therefore clear in advance that the piano would play a prominent role in this whole. Daniël Wayenberg, famous Gershwin interpreter, was immediately enthusiastic. And not without reason, because the beautiful arrangements by arranger Henk Huizinga show how much George Gershwin's music lends itself to the combination of saxophone quartet and piano.

Rhapsody in Blue premiered to a frenzied audience on February 12, 1924 at the Aeolian Hall, New York, performed by Paul Whiteman's 33-man jazz orchestra special for the occasion, in an orchestration by Ferde Grofé. At the piano: George Gershwin. In 1926 an arrangement for symphony orchestra and piano appeared. The piece immediately established George Gershwin's reputation as a serious composer and pianist and is still considered one of the most important compositions of the twentieth century.
A short vacation in Havana inspired George Gershwin to write the Cuban Overture in 1932. The exotic rhythms (performed on instruments such as bongo and maraca) and the specific, often signal-like motifs, which are so characteristic of Cuban music, form the building blocks for a composition initially entitled Rumba Droeg.

The Gershwin Melody (Not to be confused with the officially published George Gershwin songbook) is an arrangement of some of Gershwin's most famous songs. At a young age, the composer showed his talent as a songwriter. From the countless review and musicals he wrote over the years, starring stars like Ginger Rodgers and Fred Astaire, arranger Henk Huizinga put together a medley of world-famous songs like Swanee, Lady Be Good, A Foggy Day and The Man I love.
The “I Got Rhythm” variations (1934) gives a good picture of the development George Gershwin went through as a composer. Starting out as an autodidact, he continued to be skilled in composing throughout his life, critical as he was. The rhythmic and harmonic art pieces that he performs with the swinging theme I Got Rhythm, I Got Music, I Got My Man, Who Could Ask For Anything More?)
Three Preludes in one piece for piano solo. Gershwin himself premiered this work in New York in 1926. At the time, the program listed five preludes, when published in 1927, three remained.

You would not believe what four saxophones can do!
The unlimited power of expression of the saxophone has always been then starting point for the selection of the quartet’s repertoire. At times it is smooth and brilliant and other times dark and “misty” or sensual and exciting.
All these aspects find expression in the various methods of playing of this quartet and which can be heard in pieces by Glazounov, Florent-Schmitt and Rivier, representing the classical style, or in pieces by Meijering, Dikker and Ketting representing the contemporary Dutch repertory ( the entire repertory was composed orinally for the A.S.Q..
A large part of the repertoire consists in arrangements such as: “Puerto Rican SuitE”, “ Duke Ellington Suite”, “West Side Story”, “ An American in Paris”, “ Frank Zappa Suite”, and “ Jimmy Hendrix Suite”.
The A.S.Q. appears regularly with famous jazz, folk and classical music soloists.
In 1994 they recorded a CD in Co-operation with the famous Dutch violinist Jaap van Sweden, that included “An American in Paris” (G. Gershwin) and West Side Story” (L. Bernstein) both arranged by Henk Huizinga.
The ASQ has already recorded five CD’s. They have been in Concert tors through Germany, Belarus, Belgium, France, Italy and Portugal. From August 1996 they will be touring through Holland, Japan, USA, France and Italy.

Studied in Utrecht with Ed Bogaard. Played an important part in the development of Modern Dutch Theatre, both as a saxophonist and an actor, with Hauser Orkater. Joined the quartet in 1985. Teaches Sax in the Music Conservatory of Bloemendal. Beside his work as a director for T.V. and theatre, he composes for television, opera, theatre, cinema and ballet.

Daniel Wayemberg
(1929 - 2019)
Wayenberg was born in Paris. He was the only child of the Dutch journalist Jaap Wayenberg and the Jewish-Russian violinist Margarete Berson (1894 / 1895-1997) who had met each other in the Dutch East Indies. A few weeks after his birth, the family moved to The Hague. Wayenberg came into contact with music at an early age. His mother found that he had absolute pitch and decided to give him music lessons. She wanted to teach him to play the violin, but Wayenberg preferred the piano. He did not go to school: he was taught at home to give his piano talent a chance. First he was taught by his mother, then by Ary Verhaar, Dutch composer, music teacher and pianist in The Hague. After World War II, he moved to family in Paris to complete his studies with Marguerite Long (1874-1966). Since then he has continued to live in Paris.

In 1949 he won first prize in Paris at the international competition Marguerite Long - Jacques Thibaud. In 1962 he was decorated in the Order of Oranje-Nassau for his services to the Netherlands abroad and in 1967 he received the Chevalier des Arts et des Lettres in France.

After his American debut in 1953, at New York's Carnegie Hall with the New York Philharmonic conducted by Dimitri Mitropoulos, Wayenberg made several extensive tours of the United States and Canada. He also toured the then Soviet Union, Czechoslovakia, Scandinavia and Greece. In 1954 he made his debut at the Royal Concertgebouw. Wayenberg collaborated with Karl Böhm, Bernard Haitink, Eugen Jochum, Kirill Kondrashin, Rafael Kubelik and Igor Markevich.

In the Netherlands he also gained fame after 1975 for his jazz concerts with Louis van Dijk, sometimes as a duo, sometimes in a larger context with Tonny Eyk, Pim Jacobs and Pieter van Vollenhoven.

In 1985 he was appointed piano teacher at the Rotterdam Conservatory. He continued to work there until his retirement in 1994. On his retirement he received the Erasmus pin from Mayor Bram Peper.