Tango - A Tribute to Astor Piazzolla 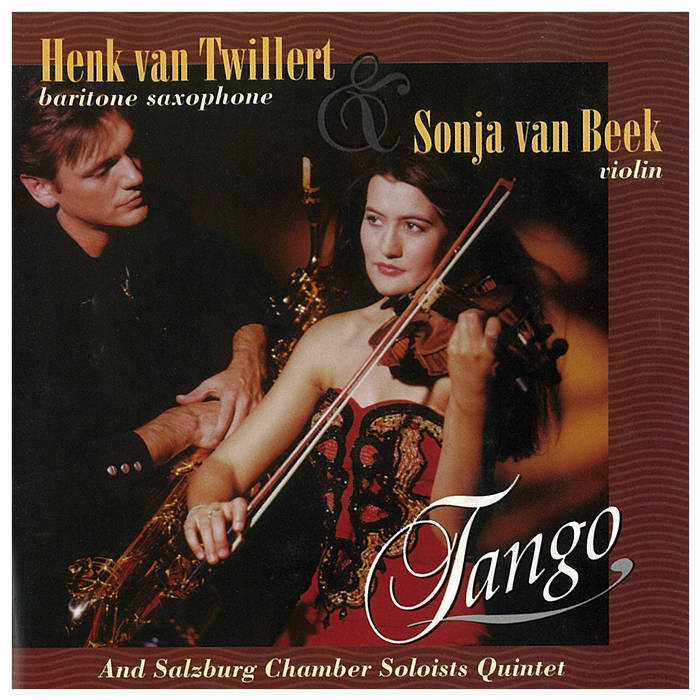 (1996) Saxophonist Henk van Twillert and The Violinist Sonja van Beek accompanied by the Salzburg Chamber Soloist Quintet played the Music from Astor Piazzolla in A very unique way has a tribute to Astor Piazzolla.
The arrangements were made by Henk Huizinga.
The track 5, Desierto, and 8, Chubasco, were composed by Henk Huizinga & Marleen Huizinga Visser.

Near, and yet so unattainable – this was how the wealth of the well-to-do bourgeoise in Buenos Aires seemed to the turn-of-the-century ghetto dwellers. Just like the Americans negroes, the poor and disillusioned (South) European immigrants east their misery from them in music and song. The tango became, as it were, the blues of the Argentinian slums. The ghetto dwellers sang and danced about everything – loved ones, well-being, freedom – that was Inalcanzablemente circa (unattainably near). As early as the beginning of the twentieth century, the potency of this dance was discovered, with all its longings, passion and unconcealed eroticism. This was the reason for its rapid transition from the Argentinian brothels to the salons of Paris and Berlin, where decadence reigned supreme. Nonetheless, the true tango with its sensually whining bandoneon and gently lingering rhythmic remained the exclusive domain of the Argentinians. Vicente Grecco (1888-1921) elevated the tango to the status of “national monument” and standardised the constitution of the ensemble with his Orquestra Tipica Criolla (violin, flue, guitar and bandoneon). This continued to remain the framework for the tango for a long time, although other combinations with violins and bandoneons were also encountered. Not until the forties did a composer, as daring as he was brilliant, proceed to give redefinition. This was Astor Piazzolla (1921-1992). He wrote orchestra arrangements, added extensive brass sections and in 1960 – oh the revolution! introduced the electric guitar into his small, jazz-styled quintet Tango Nuevo. In this way, Piazzolla brought the tango to the attention of the world and within reach of the international legion of musicians. From the seventies on, arrangements of Piazzolla classics such as Verano Porteña, Muerte del Angel and Adiós Nonino, the moving farewell to Piazzolla’s deceased father, were in ascendance. Piazzolla for the guitar, Piazzolla for the piano, Piazzolla for string quartet, quintet, sextet, ensemble, orchestra, you named. Baritone saxophonist Henk van Twillert decided to develop this idea further. Fully in the spirit of Piazzolla he opted for yet another constitution: The bandoneon, the tango instrument par excellence, is rejected and the key roles are reserved for baritone saxophone and the violin (Sonja van Beek). There are supported by the Salzburg Chamber Soloist Quintet, a string quintet under the direction of violinist Lavard Skou Larsen. The arrangements are by Henk Huizinga, who also supplied some compositions of his own in the spirit of Piazzolla. Piazzolla is now recognised constituent of the claim of legendary South American composers, despite the fact that he really would have preferred nothing to do with the tango, as this dance reminded him so much of his poor Argentinians roots. “This isn’t music”, he once said to the famous composition teacher Nadia Boulanger, apologising for a tango he had written himself. “It is Piazzolla”, replied Boulanger with foresight. We have her to thank for spurring the young composer on to continue along this path.

Paul Janssen
Biographies
Sonya van Beek
Sonya van Beek (born in 1973) began her violin studies in Costa Rica at the age of seven. From 1983 to 1988 she studied with Hans Scheepers, and then until 1995 with Davina van Wely at the Sweelinck Conservatoire in Amsterdam. In 1995 she gained her diploma as Practicing Musician, with distinction. She followed master classes with Boris Belkin, Viktor Tretiakov Thomas Brandis, Herman Krebbers and Viktor Liberman. At present Sonja is studying with Tomas Brandis at the Hochschule der Künste in Berlin. Sonja won the first prize at the lordens Violin Days (1986 and 1988) the Princess Christina Competition (1988) and the first Davina van Wely Violin Competition (1991). In April 1993 she was winner of the Oskar Back National Violin Competition.

Sonja regularly appears as soloist with orchestra, in recitals with pianist Mauriee Lammerts van Bueren and with the Echer Trio. Sinse 1992 she has also performed with the Salzburg Chamber Soloists, with whom she went on tour to Italy, France, Spain and South America. Since 1993 she has been also a member of the European Community Youth Orchestra with which she has been on several tours through Western Europe, Russia and the Baltic States, under the direction of such conductors as Vladimir Ashkenazy, Kurt Sanderling and Leonard Stakin. Sonja plays a 1709 Antonio Stradivarius, made available to her by Oskar Back Fund.

Saxophonist Henk van Twillert, initiator of the Piazzolla project studied with Ed Bogaard at the Sweelinck Conservatoire in Amsterdam, where he gained his diploma as Practising Musician on the baritone saxophone with distinction. As early as 1979 he co-founded the Amsterdam Saxophone Quartet which, by way of existing projects, put the saxophone on the map in an entirely original manner. The quartet toured with top performers like Johnny Meijer, “Lame” Nelis, Hans Dulfer, Jaap van Zweden and Daniël Wayenberg. The quartet goes on extensive national and international tours (to countries including Germany, France, Portugal, Indonesia, China).
Van Twillert, who teaches students majoring in the saxophone at the Hilversum and Sweelinck Conservatoires also gives master classes in Aveiro, Portugal and in Aosta, Italy. Together with Gian Maria Bonino, he puts a programme in Italy every year. Henk van Twillert hopes that by way of these activities he will be instrumental in the emancipation of the baritone saxophone. A number of Dutch composers (Meijering, Hekster, Van Dijk) have already composed works for him.

The Salzburg Camber Soloist Quintet is made of members of the Salzburg Chamber Solist orchestra . The artistic leader and the first violinist is the Brazil-born Lavard Skou Larsen. As well a dazzling list of international competitions and festivals to which Skou Larsen receives regular invitations, he as given lessons at the famous Mozarteum Music Academy in Salzburg since 1991. The artistic adviser to the Salzburg Chamber Soloist is the word famous Russian violinist Boris Belkin. Since his emigration to the West in 1974, he has played in major concert halls and with leading orchestras all over the world. In addiction to regular meetings and adjucations, Belkin and the Soloist Chamber Soloist , each review of the concert by Soloists, wherever in the world this may be, illustrates the sparkling approach by Skou Larsen and his team.
The musicians in the Salzburg Chamber Soloist quintet accompanying Henk van Twillert And Sonya van Beek in the Astor Piazzolla project are:

All tracks composed by Astor Piazzolla except track 5 and 8 composed by Henk Huizinga & Marleen Huizinga Visser.