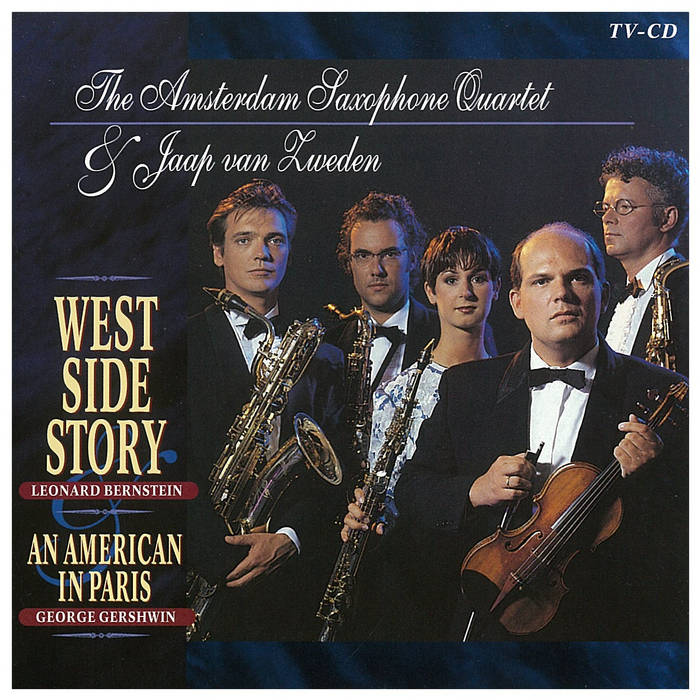 The Saxophone is a musical instrument very close to the human voice.
You can sing with it brilliantly and with great beauty - like Plácido Domingo, you can also come forward with it plaintively and growling - like the legendary blues singers. Music lovers have known it for so long: the saxophone has many faces and a wide range of possibilities and timbres. Of the eight saxophone types, the soprano, alto, tenor and baritone saxophone are the dung played. Together, these different saxophones can form a close-knit family and let the Amsterdam Saxophone Quartet have no doubt about it for years.
In the company of master violinist Jaap van Zweden, the Amsterdam Saxophone Quartet takes care of two highlights from the American Music of the twentieth century on their album, “West Side Story” by Leonard Bernstein (1918-1993) and “An American In Paris” by George Gershwin (1898-1937).
George Gershwin may owe his fame in the first instance to the many excellent songs he composed, but he also walked the way to the concert hall several times - after conquering American audiences in 1924 with “Rhapsody In Blue”. Not only in America. Gershwin's name also became a household name in Europe in the 1920s. In 1923 the composer had already been to London and Paris and the French capital in particular had fascinated him immensely. Five years later, a trip to Paris provided further inspiration for a concert work he had already started in America, “An American in Paris”. In “La Ville Lumière” he found the time to work on the orchestral piece, an activity that was later continued in Vienna. At the end of the summer, George Gershwin traveled back to the United States, with four Parisian taxi horns in his suitcases. He wanted to use them for his new work, which was now rapidly being completed and premiered on December 13, 1928 - with Walter Damrosch conducting the New York Philharmonic.

In “American in Paris” his Symphonic Poem for Symphony Orchestra, Gershwin tells the story of an American tourist who, walking down the Champs-Elysées, falls under the spell of French lightheartedness and “joie de vivre”, with typical Parisian music in the background . In a cafe the man is addressed by a young woman in American music, the blues. This homesickness disappears and when the tourist meets a fellow countryman, the blues returns, resulting in a cheerful mood for now. Our American feels one hundred percent at home in the French capital. In 1951, the music of “An American In Paris” became a cheerful film musical with, among others, Leslie Caron and Gene Kelly, who showcased his talent as a dancer in optima forma.

Dance work of a completely different level, brach the musical “West Side Story” in the fifties. The idea for a contemporary Romeo and Juliet had already been born in 1949, but was only founded years later - after Leonard Bernstein took a wrong turn off the highway along Manhattan and ended up in a Puerto Rican neighbourhood, complete with children playing under the high iron arches of the motorway. Bernstein came up with the brilliant idea of ​​placing the modern story of Romeo and Juliet in this setting. In “West Side Story” the story of two New York street gangs, the jets and the Sharks, is told in a penetrating way. They terrorise the West Side of the gigantic metropolis with the most brutal means when Tony and Maria from the rival gangs fall in love. When “West Side Story” was also given a film version in 1961, the musical reached a world audience. The enormously suggestive, realistic backgrounds, the large screen, the stereophonic sound from six speakers and the more than two hundred musicians who worked at the spectacle table ensured that the audience was included in the act and that the psychological dividing wall between stage and hall was immediately disappeared.

For the music of “West Side Story”, Leonard Bernstein focused entirely on the choreographer of the ballet magician Jerome Robbins, who sketched the theme of the musical and also, in its filming, was charged with the technical artistic direction of many astonishing, dynamic and magnificent dance scenes. That is why the music not only underlines the unbridled speed of the story, but also forms an inseparable whole with it. That Bernstein provided the music of “West Side Story” with a motor rhythm. Was obvious. Also that in the musical, just like George Gershwin in “An American In Paris”, he played a role in Jazz Influences.

The music of both “An American In Paris” and “West Side Story” has been performed hundreds of thousands of times over the years - on stage and on audio medium. The arrangement, by Henk Huizinga, for violin and four saxophones has resulted in a performance that is an ear opener for every music lover: Jaap van Zweden and the Amsterdam Saxophone Quartet have effortlessly surpassed themselves musically on this album.
Skip Vogel”

The Amsterdam Saxophone Quartet
You would not believe what four saxophones can do!
The unlimited power of expression of the saxophone has always been then starting point for the selection of the quartet’s repertoire. At times it is smooth and brilliant and other times dark and “misty” or sensual and exciting.
All these aspects find expression in the various methods of playing of this quartet and which can be heard in pieces by Glazounov, Florent-Schmitt and Rivier, representing the classical style, or in pieces by Meijering, Dikker and Ketting representing the contemporary Dutch repertory ( the entire repertory was composed orinally for the A.S.Q..
A large part of the repertoire consists in arrangements such as: “Puerto Rican SuitE”, “ Duke Ellington Suite”, “West Side Story”, “ An American in Paris”, “ Frank Zappa Suite”, and “ Jimmy Hendrix Suite”.
The A.S.Q. appears regularly with famous jazz, folk and classical music soloists.
In 1994 they recorded a CD in Co-operation with the famous Dutch violinist Jaap van Sweden, that included “An American in Paris” (G. Gershwin) and West Side Story” (L. Bernstein) both arranged by Henk Huizinga.
The ASQ has already recorded five CD’s. They have been in Concert tors through Germany, Belarus, Belgium, France, Italy and Portugal. From August 1996 they will be touring through Holland, Japan, USA, France and Italy.

Rob Hauser – Sax. Alto
Studied in Utrecht with Ed Bogaard. Played an important part in the development of Modern Dutch Theatre, both as a saxophonist and an actor, with Hauser Orkater. Joined the quartet in 1985. Teaches Sax in the Music Conservatory of Bloemendal. Beside his work as a director for T.V. and theatre, he composes for television, opera, theatre, cinema and ballet.

If you like The Amsterdam Saxophone Quartet & Jaap van Zweden: West Side Story & An American in Paris, you may also like: