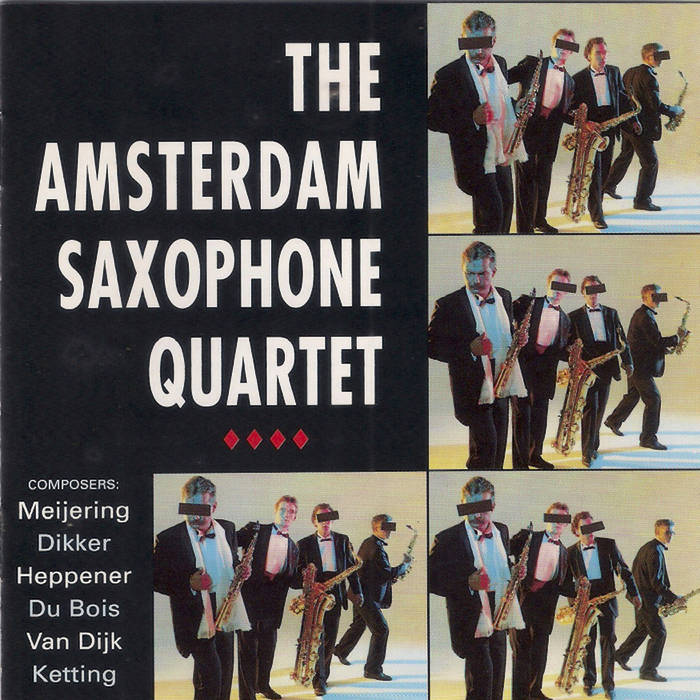 Chiel Meijering
Was born in Amsterdam on 15 June 1954. He studied composition, percussion and instrumentation at the Amsterdam conservatory. His “Electric bleu” for a wind-group, has been put on record by Ernest Bour and the Amsterdam guitar-trio has played a complete CD with compositions by his hand. Two orchestral works (“Bedouin Caravan in the desert” and “The end of a specimen”) went into premiere conducted respectively by Lucas Vis and Ed Spanjaard.
The first one in a Gaudeamus-week, the second one with the Dutch Ballet-orchestras in the week for young Dutch Composers, opens and ends with jazz. Heavy chords in the beginning and at the end a swift five-sixteenth time makes one remember, but it has nothing to do with the foregoing, as more often in his early works. In “ ’n Haar op ’n hood”, a piece of more recente date, the composer tries to create more unity in the musical material. The static chords at the beginning prepare a moving funky-bass in the baritone, over which a swift 4-time motif causes an emotion. Over the returning starting-chords, bitingly played by contralto, tenor and baritone, the soprano-sax tumbles up and down in octaves. From then following baritone-funk-riff, with frolicly interlocking motifs, a moving field arises with leaping motifs through which a slow melody is gliding.
After some time the piece is moving forward by means of a motif moving in swift sixteenths by tenor and baritone, about which the soprano and the contralto make circulating movements. In the final roaring, chromatically descending motifs of tenor and baritone support a maddening merry-go-round motive of soprano and contralto.

Loek Dikker
Was born 1944 in Amsterdam as has been active as a composer, pianist and arranger since 1964. He has contributed in the above mentioned roles to film and to stage productions such as ballet, musical theatre, to symphony orchestra and jazz ensembles. In 1981 he wrote his first film score, and this was immediate start of a successful career as a composer, music supervisor, music editor and music producer for the cinema. His contribution to the “The fourth man” directed by Paul Verhoeven, has gained the prize for the best Dutch film score in 1963. It also brought him international recognition. Since, he has been composing for film in countries throughout Europe; he also composed for a couple of Hollywood productions. In September 1990 he was awarded “The Golden Calf” - the Dutch Oscar - for his contribution for film music in the last decade.
Loek Dikker’s composition on the CD was made on the request of the A.S.K. and was completer early 1089. The piece is a frugal piece of work, well to be played in technical respect and simply constructed. The piece has been built up with the help of two motifs ( cells); it immediately opens with the first , four-count-long motif, and the second motif, 8 counts long, already appears in time ten. The variation-form used here, mostly consists of variations in style, in which the motifs are continually disguised in new outfits and pop up in a different style. The actual adventure in this piece consists of a more or less playful dressing-up. Because of that the piece has turned into a piece with dramatic contents as well.
It is common knowledge that this sort of frugal works - in spite of themselves - are the worst parts to perform. Therefore the A.S.K. is complimented on this recording by Loek Dikker.

Robert Happener
Was born in Amsterdam in 1925. He received his musical education at the Amsterdam Conservatorium: piano from Jan Od and Johan van dam Boogert. After that he followed lessons in composition at berets van Lier. For some years he has been a teacher at theoretic subjects at the music -Lyceum in Amsterdam. At present Happened is a teacher at compositions and theory at the Sweelinck Conservatorium in Maastrich. Happened wrote works for several strengths. For the orchestra among ohs “ Four songs” on poems by Ezra Pound ( 1970) for which he received the Willem Pijper- prize in 1974.

Rob Du Bois
Born in 1934, is a self-taught man being a composer . Personal contacts with a.o. Mathijs Vermeulen, Kees van Baren and Daniël Reinemann have influenced his work. As a pianist he formed a duet with Wil Eisma, and cooperated with Willem Breugel. In 1972 he Stopped giving performances. He composed for wind-quintet and viola - solo, wrote a piano concert and a work for the bass clarinet Group of Harry Sparnaay. Rob Du Bois is also active as lawyer at Buma/Stemra.

Gijs Van Dijk
Was born in Delft in 1954. He studied the classical guitar in Hilversum and afterwards composition at Tristan Keuris at the Utrecht Conservatorium. As an improvising musician he has led a group of his own since 1984. He composed among others “ In Miniature” for string- quartette, “Betrachtung” for mezzo-soprano and 10 instruments on texts of Franz Kafka and some pieces for the Arcciotti-ensemble. His “ Quintette for saxophones and piano”was completed on October 1086. Since then the piece has regularly been put on the reportory of the Amsterdam Saxophone Quartet and went through various radio broadcastings.
“Quintette for saxophones and piano” is a solid composition in which the sound of the piano is mixed with those of the saxophone in such a way that they intensify each other. If the piano will be strengthened electronically a bit, so that the saxophones can go out full, only then the desired “heavy metal”effect is reached. A great variety of the material has been distilled from the chord g-cis-d-gis, which is consequently forged together to an extending network of connections . Three united parts can be distinguished:
Allegro assai, a swift, turbulent, but very earthly part with in the middle the bariton-solo.
Lento, motto tranquillo, a movement from horizon to horizon.
Coda, a tutti referring to the baritone-solo, with superficial whipping up sequences in a post minimal style. This piece has been recorded with the cooperation of Niek de Vente, piano.

Otto Ketting
Was born in Amsterdam in 1935. He received his musical education at the Conservatorium in Den Haag and in Munich from Karl Amadeus Hartmann.
For a number of years he has been active as a trumpettist, among others in the Residental Orchestra. From 1967 to 1971 he was the headteacher at composition at the Rotterdam Conservatorium, from 1971 to 1974 he held the same position at the Conservatorium in Den Haag.
Otto Ketting also performs as conductor of mainly twentieth-century music. In this quality he conducted many Dutch orchestras and ensembles. At the Rotterdam Conservatorium he conducts ensembles for contemporary music. His “Symphony for Saxophones and Orchestra” was performed in many countries and broadcast by the radio.
In 1980 this work was distinguished with the Matthijs Vermeulen - prize and with the second prize on the Rostrum of Composers of the UNESCO.
‘Mars”(1979) has been written for amateurs by order of Johan Wagenaar - foundation. A piece of playing - material as easy as possible for pupils of schools of music, with some carefully applied ( 2 contralto and 2 tenor), but innumerable variations are possible, also doublings, applicable dependent on the teachers insight. On this cd the strength os 4 contralto and 4 tenor saxophones and the piece has been recorded with the cooperation of: Remco Majoor, Cunera van Lier, Casper Becks, Daphne Balvers and Mark Lenselink.

The Amsterdam Saxophone Quartet
Was founded in 1979. The chief classical works are on their repertory
The quartet inspired numerous composers to write new works, which resulted into a vast number of compositions dedicated to the ASK.
The unusual interpretations, the searching for differentiation in timbre and the notion that no other instrument has so many points of contact with so many musical styles led to the fact that the ASK made its appearance on many fields of the music-culture. Performances with pop-groups, folksingers and jazz-soloists, besides the playing of a wide range of arrangements, are by now the trademark of the Amsterdam Saxophone Quartet.
Their classical education, however, always remains clearly audible.
The ASK gives concerts at home and abroad; it can regularly be listened to and often be watched on television and heard on the radio; it made several tours and recorded much of their repertoire on compact disks.
The members of the ASK are active on various conservatories and musical schools in the Netherlands and are asked to perform as a quest-thatcher abroad on a regular basis.
The members of the Amsterdam Saxophone Quartet are André Hemmers (soprano), Rob Hauser (Alto) Bart Kok (Tenor) and Henk van Twillert (baritone).

If you like The Amsterdam Saxophone Quartet: Meijering | Dikker | Happened | Du Bois | Van Dijk | Ketting, you may also like: